By Henriette Johansen, honors student, University of Oslo, Norway and participant in the Innovation Lab

Today I arrived at San Sèrvolo, a little island just a boat trip away from Venice. This island is where most of the workshop takes place. We are a little group consisting of teachers and students from nine different universities around Europe, and in the upcoming days we will work and learn together. The topic for the workshop is marine conservation and citizen science, mainly centred around the Venetian Lagoon. The programme this week is quite intense, but this day was dedicated to arriving at the island and getting to know each other.

Today we had lectures and discussions on citizen science models and socio-ecological interactions in the Venetian Lagoon. We learnt about how the layperson could participate with data collection, e.g., through various apps. We also acquired knowledge about the lagoon. In the evening we went to Venice, and luckily, we had locals guiding us to the best pizza places Venice has to offer. 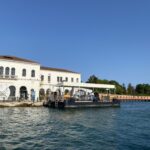 Today the boat took us to Ca’Roman wildlife sanctuary which is a protected area on an island. What is special with this island is not the vegetation in particular, since much of it is imported from other places, but the climatic conditions. Because of these, it is possible for moss from a Baltic climate and herbs from a Mediterranean one to grow at the same place and co-exist. We learnt about factors threatening the climate on this island, and unsurprisingly, human activity is the biggest threat to the ecosystem here. Under the Second World War the island was used by Nazis, so you would also find deserted Nazi bunker in the middle of the vegetation. On our little excursion we also got the chance to go for a swim in the ocean, something that is desirable to do neither at San Sèrvolo nor Venice because of the polluted water. Afterwards, we went to a local and cooked pasta, providing us with an authentic, gastronomic Italian experience.

Today we worked in groups and implemented what we learnt from the day before into the project. Every group started with their own citizen science project, and these were to be evaluated by a panel the following day. My group focused on human awareness and used models from social psychology as a basis for the framework we were to develop. In the evening we went to the city and strolled through Ghetto Ebraico. According to the locals the word ‘ghetto’ as we know it has its origins in this neighbourhood. Ghetto comes from the Italian verb ‘ghettare’, meaning ‘to cast’ and it was exactly this the people in this neighbourhood used to do; to cast metal. Eventually, the neighbourhood became known as an area where Jews settled down, and then this word spread to the rest of Europe. 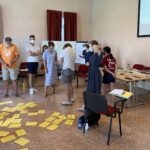 Today we presented our work and received feedback on it. Each project was places in a diagram that told us where it was located in respect to the axes ‘concern for human well-being’ and ‘concern for ecological integrity’, and our project had the most radical approach, within the ‘transformative change’ domain. It was interesting to see what the different groups were able to create in the timespan of less than a day, and it is fair to say that none of the groups lacked creativity!

Today was the last day with the intense programme, and we had a ‘harvesting’ where we collected thoughts and impressions of the workshop and shared them with each other. After the harvesting we got a private guided tour of Venice by the student participant from the host university, Ca’ Foscari University of Venice. In sum, a splendid workshop with fantastic people! 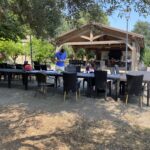 Today it was time to say goodbye. After an intense but delightful week at San Sèrvolo we were finally going to head back home. Before heading back home, some went to the museum, had their last round of spritz and enjoyed a last meal together. Others had to get up early in the morning to catch the first boat. A couple of people were lucky enough to stay a few days more. Eventually, all of us went home with happy memories of an unforgettable workshop.

Ciao and thanks for now, Venice!

I am the footer call-to-action block, here you can add some relevant/important information about your company or product. I can be disabled in the Customizer.
Get In Touch
Back To Top